Mosquitoes of Moreau
It is a beautiful day in our park and you are out hiking one of your favorite trails, and then you hear it and possibly see and feel it, a blood sucking mosquito ! Mosquitoes have been a plague to humans through out history causing millions of deaths as they transmit a wide variety of pathogens, including malaria and many viral diseases like Yellow Fever, Dengue Fever, West Nile, Zika, and many types of Encephalitis. Although mosquito borne diseases can be a concern here in New York, with proper precautions (repellents and clothing), it is not a major concern. Clearly our tick “friends” and the diseases they carry are currently a bigger concern. 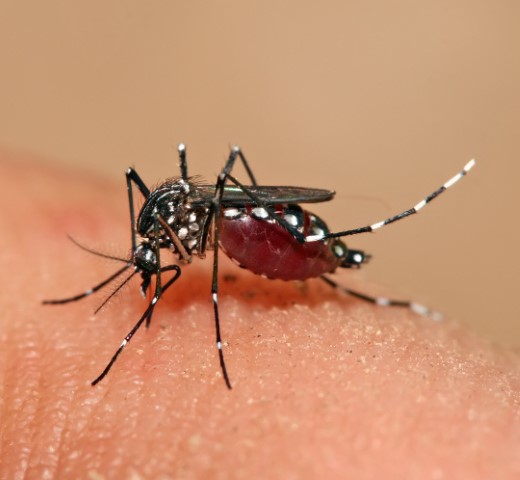 Mosquitoes are in the order of insects called Diptera or true flies. Like butterflies, they go through a complete metamorphosis meaning the larvae form a pupae (like a butterfly’s cocoon), and emerge as an adult. Like many blood feeding insects, it is only the female that takes a blood meal. She uses the proteins in our blood in the production of her eggs. Male mosquitoes on the other hand, are not a nuisance as they feed on the nectar and sugars from plants. 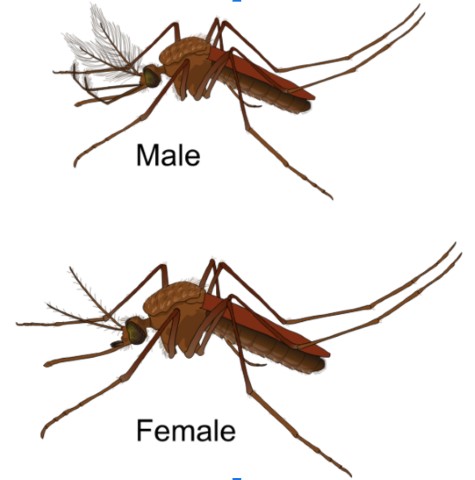 When you compare the antennae of the two, you will notice that antennae of male have a very feathery look to them. The hairs respond to vibrations in the air much like how our eardrums respond to sounds. When we hear that characteristic sound of a female mosquito’s wing beat flying close to us, we hustle along to avoid a bite. When a male mosquito detects the sound, he seeks it out as a possible reproductive mate. Interestingly enough, it turns out that different species of mosquitoes have different wing beat frequencies.

Surprisingly there are almost 70 species of mosquitoes that have been identified in New York state. Fortunately, most of them do not feed on humans. Most mosquitoes prefer, birds, amphibians, reptiles, and other mammals. However, as we all know there are plenty of mosquito species left that find our exposed skin or thin t-shirts irresistible. 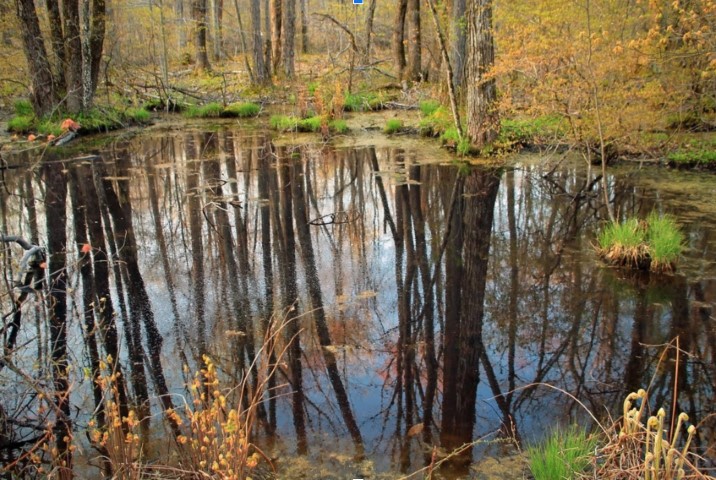 Mosquitoes all have one thing in common. They need standing fresh water to lay their eggs and for their larvae to develop before they emerge as adults to annoy us. Probably one of the largest breeding sites in our park are the hundreds of snow melt vernal pools. As the winter snows melt and we receive spring rains, these shallow depressions fill with water. Most of these dry out by summer but not before the eggs hatch and develop into adults.

Another interesting breeding site in our park are “tree holes” that collect water from melting snow and rain. One of the fiercest biters is Aedes triseriatus which predominantly breed in this stagnant water. 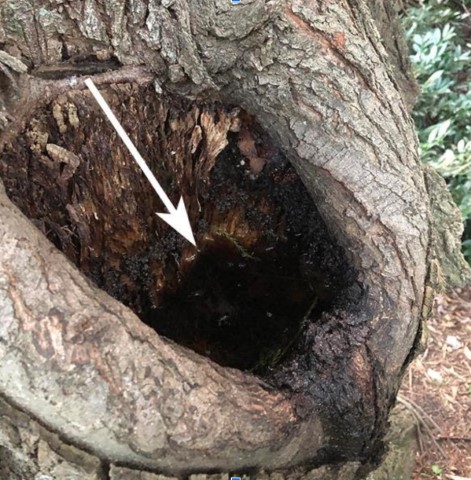 Like all animals mosquitoes need oxygen to survive. The overwhelming majority of mosquitoes hang suspended to the water’s surface using the surface tension of the water. They “breathe” air trough a snorkel like extension from their abdomen. In the video below you can see them dance under the surface.The pupae do the same thing with modified “horns” from their heads. It is also unusual to see insect pupae that are active.

Here is a video showing the mosquitoes breathing air:

An interesting exception to this, and a fierce biter here in New York, is a species called Coquillettidia perturbans. Their abdominal snorkel is modified to puncture the submerged stems of aquatic plants where they get oxygen. They are sometimes called the cattail mosquitoes as they attach to the roots of this plant. Unfortunately, Coquillettidia also uses the invasive plant Phragmites which we have in abundance in our park. 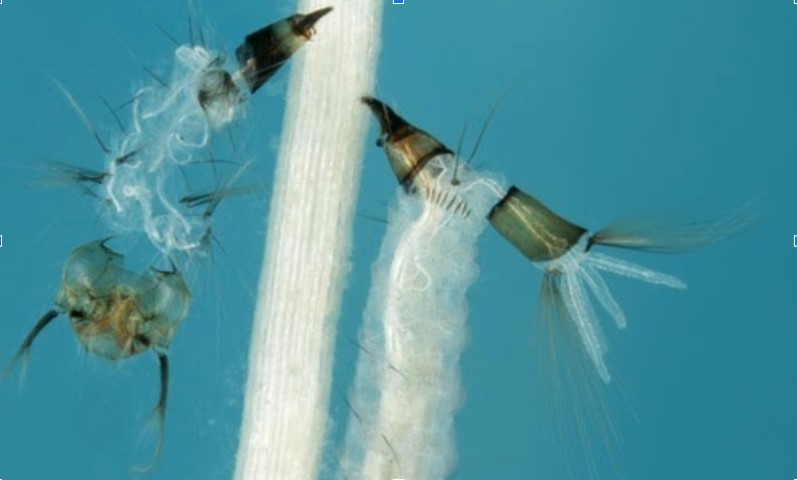 My favorite mosquito, (if you can have a favorite), is a species called Wyeomyia smithii. It can only be found breeding in the carnivorous Pitcher Plant that is present in a few isolated habitats in our park. Pitcher Plants collect rain water and along with digestive enzymes produced by the plant, break down insects and other arthropods that get trapped.

Like other “insect eating plants”, they use their captured prey as an added source of nitrogen, since they are usually found in wetlands low in nitrates. The cool thing about Wyeomyia smithii is that their larvae don’t get digested and survive quite well. In addition this is a mosquito that does not take a blood meal. 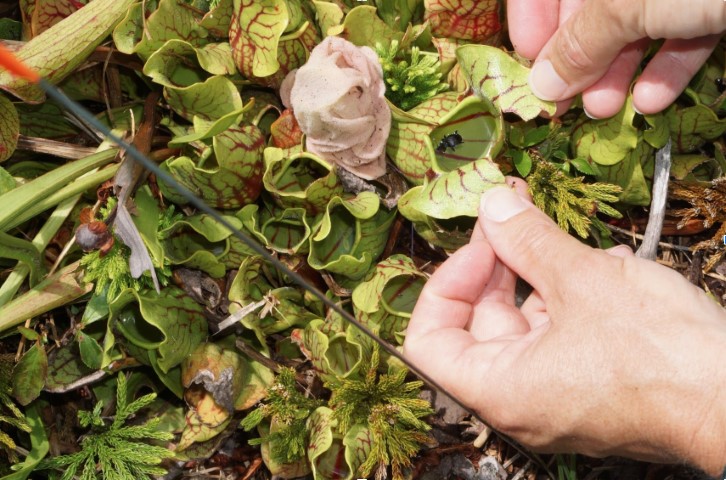 So when you are out on the trail hiking, how do mosquitoes find you ? One of the first clues mosquitoes use to track you down is the carbon dioxide (CO2 ) that we exhale. An increase in CO2 can alert a mosquito that a potential host is nearby and a they will then move toward that area. I spent several summers trapping mosquitoes by baiting them with dry ice. The cloud of CO2 around me was probably perceived as a marching band walking through the swamp.

Mosquitoes are also attracted to certain compounds that are present on human skin and in sweat (aka body odor). These compounds give us a specific clues that can draw mosquitoes in. Often times you hear that someone say “the mosquitoes really love me”. Research does indicate that some folks are indeed more attractive than others to mosquitos. It appears that genetics and skin bacteria play a role in the differences in body odors. A recent study suggests that blood type may also be a factor, with type O blood being more attractive. Their antenna also have infrared receptors that detect our body heat. Additionally female mosquitoes have well developed compound eyes that can pick up motion and discern color. Essentially mosquitoes are little extra-sensory blood sucking missles with us as their target.

So what can you do avoid these blood suckers ? Here is a great list of preventive measures from Healthline.

Jim is the Friend’s Treasurer and a retired biology science teacher. He is an avid hiker and outdoorsman with a constant thirst for discovery of all the natural features in the park. Living close to the park, he regularly hikes the miles of trails and captures his finds in photos. We enjoy and appreciate his expertise. As he continues to share his knowledge, we are all that much better for it! We will profile many of his discoveries throughout the year. If you have any questions for Jim – he can be reached at treasurer@friendsofmoreaulake.org